David V Stewart June 11, 2014 June 11, 2014autobiography, Creative non-fiction, Nostalgia, Video
Another year, another room
Where you hang a few things on the walls
It’s just where you call home for now,
Until it’s time to take them down and move on.
-David Gold, from “To long life in the Limbo Union” Woods 4: The Green Album
The act of moving, and by that I mean changing your home from one location to another, is usually not looked back upon fondly. This is for good reason, as moving can involve hours of physical labor, tedious organizing, and frantic cleaning in an attempt to recover one’s security deposit. Having moved some five times in the last three years or so, I can say that I am thoroughly through with the experience. I’m ready to have a home and I hope this time I get to stick around it in it for a good long while.
However nostalgia, as I’ve made a point to clarify in the past, is not always a memory of something positive, it is just a powerful memory. The moving experience is always memorable for me. You take your things off the walls. You pack your knick knacks into boxes. Soon the clothes and the pots and the pans go, then your furniture and your toothbrush. You are left with empty rooms, no longer your home at all. For me it is a powerful experience. You enter limbo, where you get to contemplate all the places that were once home.
At the same time, there are numerous positive nostalgic feelings that I get when I move. I remember the past places I lived. I remember the joy I had there, and the promises that location made when I moved in. I also remember how I felt when I moved out. Here are a few of those places. I get take back there a lot.
Frank Court, Bakersfield, California
My parents rented a house in Bakersfield when I was young while my mother stayed home with myself and my sister. When I was five, they bought a house, and so the first real memory I have of a house being mine was on Frank Court. I remember the house being empty, and shouting to it, “goodbye!” as I walked out the door for the last time. I remember seeing the row of four bushy trees for the last time, as well as a thicket at the end of the street that I used to play in with my friends that lived down the street. I fell asleep at some point in the move and woke up in my new room.
North Park Apartments, Fresno California
My first apartment was across the street from Fresno State, where I was a graduate student at the time. They were really crappy, but I had a great time initially being independent. I moved in sort of one item at a time, and slowly the apartment became more like home. I’m nostalgic of lots of experiences from that little cave of a place, a few of which I address in my Berserk entry.
Whitney Avenue – Fresno, California
This was the party house of my young adulthood. It was a place of recklessness and freedom, joy, laziness, booze, comfort, lots of taco bell, and lots of World of Warcraft. I was incredibly excited to move in with my best friend, Matt, and who would become my other best friend, Gary. The house was small and cramped, dark and dusty, but full of life and great camaraderie. I remember blasting Lost Horizon as I unpacked, stuffing my guitars in every nook and cranny in the oddly shaped closet of the master bedroom. 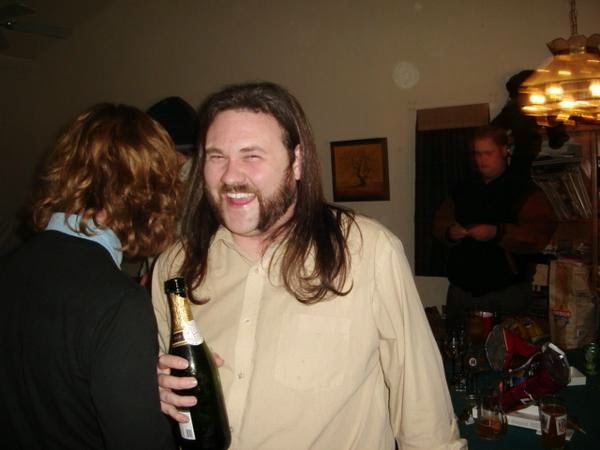 When the time came for all of us to depart, we were not in such high spirits. Gary had lost a job, I had lost work as well as underwent a radical professional upheaval, and Matt was struggling to find the next stage of his life. It was sad moving out. I wasn’t ready, but I had to move. I threw away the couch, my TV, my mattress, and a host of other things. Still, there was some humor.
I remember clearing out the garage with Matt and his dad, and we drug out a trashcan we used to collect the beer run-off from our tap (we had a kegerator – we drank a lot), which was filled with disgusting brown sludge from countless kegs of dark beer, particularly Newcastle.
I remember Matt saying, “Is this what I’ve been putting in my body? If so, I’d better obey my thirst!”
Nellis Avenue – Las Vegas, Nevada
Everyone lives, but not everyone truly dies
While they’re still alive and survive
Without anything to lose, I don’t care what will happen to me
I climb through this dirty window of opportunity
-David Gold, from “Into Exile,” Woods 4: The Green Album
My first apartment in Vegas offered a new start. My old life in California had felt desperately stagnate for some time, and felt like I needed to leave, even if it was only for a while. I moved back in with Matt, who had found his way to Vegas a short time earlier, and our first apartment was in many ways the best place we had lived since our parents’ houses. It was big, and was dark, and we had our own bathrooms. Vegas has its own set of nostalgia, but moving into this apartment makes me remember its own moods.
I was pulling a trailer over the pass of the I-15 right before march, and surprisingly, it was snowing, and was a frightening endeavor. It was unseasonably cold in the city, too. When we moved into the apartment, we couldn’t immediately get power or hot water. I had to shave by the light of a cheap fluorescent lantern with cold water.
Once the power was on, we had a pretty good time. Interestingly, the former party boys virtually never had anyone visit. I found out that such things are a bit standard in Vegas; people prefer to go out, not go to house parties. We filled our time with work on our pet project: black metal. We both ended up feeling a bit lonely, and eventually moved out of our fortress of solitude to a new apartment. Things were boxed up once again.
Jeffreys Avenue – Las Vegas, Nevada
Our second apartment in Vegas was actually in Henderson, way out on the edge of town. If you walked across the street, there was nothing but empty desert beyond a few buildings. To us, the apartment offered better social arrangements. It was nicer and in a nicer part of town. However, right after we moved there our friends moved to North Las Vegas, and would seldom visit. I unpacked my things, set up the constant companion that was my computer, and continued on my way. Almost immediately I felt like I would not be staying there, or in Las Vegas, for much longer.
This feeling was matriculated as I entered into a relationship with the woman who would become my wife. For me, that apartment represented something special to both of us. We got to spend weekends there, in rest and also enjoying the life of the city, and the weeks were spent in hard work as she went back to Los Angeles, where she lived and worked. Virtually all of my memories there are pleasant ones, even if they were too brief. I was happy under grey skies and electric lights, even if the whole experience was bittersweet.
Out of Exile
Leaving was another odd experience. Matt and I were both let go from our jobs the same hour, over the phone (it actually inspired a teleplay) while we were in California writing. We found out later it was a move done unilaterally by a new employee who left shortly afterward, but it was also from a company that by this time we hated working for, so the feelings involved were odd. In a big way, we were happy to be let free. At the same time, Vegas also had been a slowly dying dream for both of us. I had failed to find success, and Matt’s success had turned out to be something other than expected.
Packing up happened swiftly; by the time that all the events happened I was already spending all my time back in California. So we rented a trailer and threw everything we could into it. We weren’t fully packed and it took us most of the day, so that we couldn’t even leave for home until ten at night. We drove across the desert under the stars, carrying literally everything of value we had.
Matt called me from his car before Baker. “I was just thinking, if the trailer fell off and exploded, I wouldn’t care. Everything of value I own is in this car.”
He was right, on both our cases. He had his guitars, his computer, and his dog. I had my guitars and my computer. What else was there? We stopped at a Denny’s in Baker, exhausted but determined to get to Bakersfield and then Modesto. I took this picture there, and the other at a rest stop somewhere in the desert.
Las Vegas offered me the radical, life altering experience I had asked for, but in none of the directions I expected. I was sad to leave it behind, but it was without question a change for the better. We played the blues as we left. 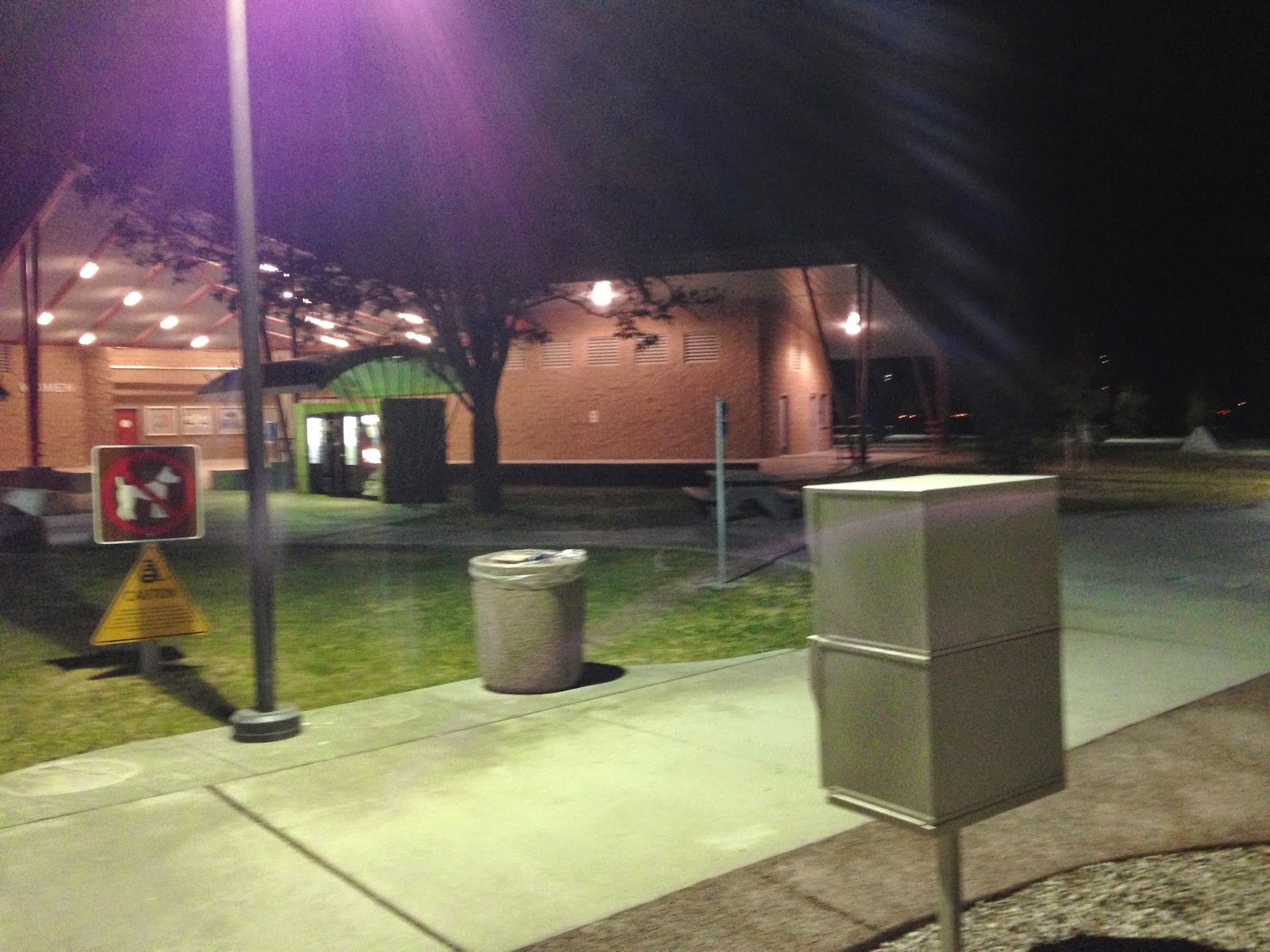 El Segundo, California
As I write this post, I’m a resident of El Segundo. In two more days, I will cease to be. Leaving here with my wife has provoked a lot of older memories, but what separates this move from others is that I will be leaving a happy life. I had a job I liked, I lived with a woman I loved (and still do- I even convinced her to marry me somehow), and got to work on my passions with nothing but support. I’ve gone through some hard times here too and come out fine on the other side. I don’t need the change this time, but I’m choosing it, and for so many reasons. This little town in LA has been good to me, but it’s time to move on.

By the way, the TV stand in the picture used to be a Hammond organ, and has been with me everywhere I’ve lived since I was eighteen.

You can find Matt’s blog at http://thespiritualvoluntaryist.blogspot.com/