He Should Have Taken his Gun (Halloween flash fiction special)

The point of flash fiction is to condense a story down into its barest and most essential parts. I have attempted to do this with horror, providing characters and plot points in just over 200 words. Enjoy! 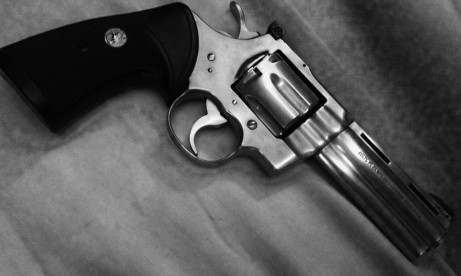 He left it sitting by his pillow. Why?

Julie’s hand hesitated over the buzzing phone. It was a DC area code… probably that FBI investigator again. That meant it was important, but she didn’t want to answer it. It meant hope was gone.

Memories returned. It was like the beginning of a horror movie. They were in bed. Something went bump. Probably the cat again, but she had to be sure. Dylan went to go check it out, closing the door behind him. It never opened again.

She waited what seemed like an eternity. She called out to him, with no answer. She went downstairs, holding Dylan’s .357 uncertainly. The back door was open, and he was gone. A small smear of blood was left, and she collapsed, the gun falling to the floor. The horror. Then tears, endless. They came back now.

She picked up the phone.

“This is Julie.” She tried to keep the tremor out of her voice, and failed.

“This is Terry Dunn.”

“You found his body?”

“Not exactly. The fingerprints in the blood, that the intruder left-”

“You will, and I’m sorry. Check your bank account.”

The agent waited on the line while she booted up her computer and quickly logged into her bank’s website. Her formerly vast account balance read nothing but zeroes.