Prophet of the God Seed, part 5 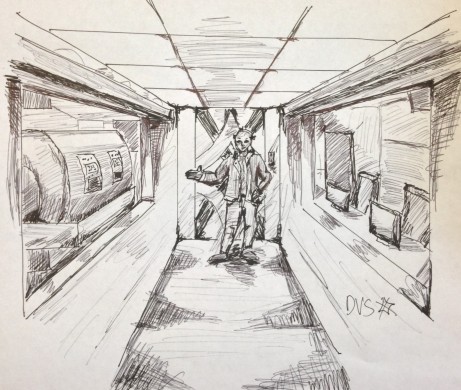 Padalmo grimaced as he swallowed another spoonful of the strange, semi-solid grey substance. He would not have known it was food had he not seen the bald man slurp down half a bowl himself. Moses. I like that name. It has a godly quality to it.  He looked at the bald man, sitting in a chair beside Padalmo’s bed in the long room that made what Padalmo assumed to be part of a hospital. Now conscious, he could take in more clearly the image of the man beside him, who was tall and lean. He wore a simple set of green-hued pants and loose fitting grey jacket over a similarly grey shirt. The bits of metal on his head seemed to be growing right out of the skin. They looked electronic to Padalmo’s eyes, but he could not be certain.

“Is the food not to your liking?” Moses said, with his strange, other-worldly accent.

Paldamo smiled and looked back at Moses. He looked oddly child-like as he stared back at Padalmo, with his dark and lineless face, and the dark eyes which poured over him without looking away. Did he have different manners, or did he have no manners?

“It’s better than nothing,” Padalmo said, and forced down another spoonful.

“Of course it is,” Moses said. He cocked his head away for a moment. “Were you being facetious?”

“I was being truthful,” Padalmo said. “But the way I said it could have been an insult. I apologize.”

Moses nodded. “Better than nothing, but not necessarily good. I see. You don’t like it then.”

“No, I find it rather bad,” Padalmo said. “But that does not mean I am not grateful. Frankly, I don’t know the last time I ate. They say hunger is the finest seasoning, but I am finding that truism a bit lacking.” He stared at the grey mush in his bowl.

Moses stared at him a moment, unblinking. “I understand. Yes. When we are hungry, we are much more willing to accept substandard food because of the need for nutrition.”

Padalmo laughed. “You don’t have to explain it to me.”

“The chieftain says it is good to explain things to myself.” Moses shook his head. “Sorry, I forgot you don’t know who I’m talking about. Also,” he looked down at the food. “I realize that I have made a bad assumption. I have fed you the food that I myself prefer, without taking into account that you might have different tastes than me. I apologize. If you are feeling up to it, I can take you down to the wing’s food facilities. There should be better accommodation there.”

Padalmo put the bowl down on a nearby table and swung his legs out over the bed. He felt his bare toes dangle a bit, then pushed himself out of the bed. His legs ached as he put weight on them, but he felt strong. He realized he was clothed only in a simple white undergarment.

Moses looked at him. “We’ll need to get you some clothes. I think I have some spare scrubs around here somewhere. I’ll be right back.” The bald man hurried to the end of the elongated room. Padalmo flinched as part of the wall opened up, and Moses stepped through. He returned with a pile of clothes in a dull grey and placed them on the bed. “I’ll give you some privacy. I’ll be right outside the door.” Padalmo nodded. Moses walked back to the edge of the room. The door opened up and he disappeared behind it.

Padalmo quickly put on the clothes, which consisted of a loose fitting pair of pants and long-sleeved shirt. Both were made of a soft material that felt like cotton. The shoes had no laces or other means of securing them to the feet that Padalmo could see, but after some effort he managed to shove them on. He took a deep breath and looked around the room. Four beds, and some consoles. A rolling table stood nearby the section of wall that should be the door. A few pieces of metal and a plastic bag sat idly on it.

Am I in the house of the gods? He was doubtful. Though there were undoubtedly strange things here, Moses, for all his eccentricities, was still human. That much was sure. Padalmo took a deep breath and shuffled toward the end of the room. He was surprised when, from no input of his own, the door opened for him. He found Moses waiting on the other side.

“Ah, good,” Moses said, looking him up and down. “Follow me.” Padalmo nodded and followed Moses through another set of doors which looked more to their purpose than the sliding wall in the room full of beds.

They entered a long hallway, and through glass on either side Padalmo could see machines in a bone white, and screens for what looked like computer terminals.

“Where are we?” Padalmo said, almost off-hand.

“We are in the medical department of grey wing,” Moses said, turning around and smiling at Padalmo. “This is my current station. These are some of the department’s medical machines.” He pointed through the glass at a large cylindrical object with an opening at one end. “That is our advanced tissue regenerator. Captain Claribel and I used it to repair your damaged lungs.”

“No, I have no specialty yet. The chieftain thought it would be a good, low-pressure assignment for me. We almost never need medical facilities, except for the health maintenance of the clan members, and most of them are in great shape.” Moses smiled. “You are actually my first emergency patient.”

Padalmo cocked his head. “The chieftain? The clan?”

Moses shook his head again. “I’m sorry. I’m forgetting about you again. I’m not very good at explaining things to others.” He gestured for Padalmo to follow him. The went out another set of doors and into another hallway, this one narrow and windowless.

“We’re in between departments.”

“No, I mean, where is all of this?” Padalmo stopped in his tracks and looked around at the cramped hallway. “Are we in the dark zone? Is this facility near the steaming sea? Do you work for one of the power consortiums? Are you a darksider? Are you with one of the side-factions of the Drog’Chu alliance? Where is Travole, if he had anything to do with this?”

Moses paused. “What is the last thing you remember?”

“You and a grey-haired woman talking to me. I was in bed.”

“My home – no, the desert. I was in the desert, and then a transport arrived.”

“So you do not remember the journey up here,” Moses said. He scratched his chin. “I can see why you’re confused. We are not part of any faction, either allied with you or in opposition to you. We are currently onboard a spacecraft orbiting the planet you call Terranostra.”