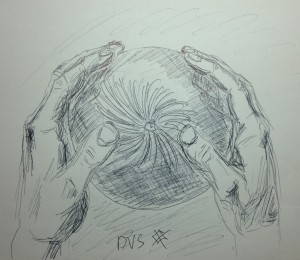 Kenneth had never seen an irregular temporal sphere before. Bernard leaned on his knees and held the object between his hands, staring at the golden center, swirling like the center of the galaxy and throbbing like a dying heart. It glowed subtly. Temporal singularities were uncommon playthings, even for the wealthy.

“So what did you decide to study?” Kenneth asked, putting down his tablet. He was starting to get fatigued from his class readings. Temporal vibrating membranes was a hugely interesting academic area, but required more of Kenneth’s brain power than he could spare with Bernard sitting in his dorm room.

“My parents want me to study irregular temporal probability,” Bernard said, rolling the time-sphere around in his hands. “That’s why they bought me this.”

“No kidding. You have to have an innate understanding of retrograde time. At least, to be good. I don’t know if I want to study it.”

“Man, I would love to get into that,” Kenneth said, nodding to the sphere.

“Why don’t you?” Bernard said. He tossed the sphere to Kenneth, who caught it, fumbled it, then dropped it to the ground. It thudded without a bounce. He picked it up quickly, almost dropping it again because of how deceptively heavy it was.

“Because there’s no money in it,” Kenneth said. “I’m going to have the better part of a 100 million kilodollars of debt by the time I get out of here. The only way I’m going to be able to pay that back is with a job working for one of the hyperdrive manufactories.”

“Bah,” Bernard said, and leaned back. “I’m not going to pretend it’s hard to be rich, Kenneth. But making decisions like this… I’m just going to say that taking the challenge out of something takes away some of the passion, you know?”

“Retrograde temporal probability still seems plenty challenging to me,” Kenneth said. He held the golden swirling sphere up to his hands. Suddenly, the sphere pulsed and wobbled. “Did you see that!”

“What?” Bernard said. “Oh, that. Yeah, it does that sometimes.” Kenneth turned around and began jotting something down on his tablet. “Anyway,” Bernard went on, “since my folks are paying for everything I don’t really feel that threat of failure, you know? I mean, sure I can do retrograde time stuff, but I don’t really have to be great at it, do I? If I suck, or if I’m just mediocre, its ok. Nobody to pay back. Hey, what are you writing down?”

“The exact time the sphere did that wobbly pulse thing,” Kenneth said.

Kenneth half-sighed, half-grunted. “This is an anti-time singularity, Bernie. You have to keep meticulous records of all outputs, so you can link them to inputs in the future. That’s how you study retrograde temporal events.”

“How do know that it wasn’t just reacting to you dropping it? That it’s not anti-time at all. What if it’s… slowed time, or something?”

“Because changes in time flow require speed or gravity, or both,” Kenneth said. “You remember relativity lessons from grade-school, right? Besides, your folks wouldn’t buy an anti-time singularity that was fake.”

“I guess that’s true,” Bernard said. He grabbed back the sphere and looked at it. He dropped it on the ground, then picked it up again. He waited a few seconds. “Didn’t happen that time. I guess you’re right.”

“You ever think it’s fun dropping that thing, and wondering if it shook the shop keep’s hands a few weeks – hell, a few years – ago?”

“Yeah, but who’s dropping it and making it shake for us?”

“You’ll have to hold onto it and find out,” Kenneth said. “Each singularity has a different lifespan until it goes dun.”

“Literally runs out of time. After that it’s just a paperweight.”

“Cool. I always wanted a 500 million kilodollar paperweight.” Bernard tossed the sphere about some more.

“Odin’s bones, it cost that much? I could pay for all of my degrees with that!”

“Then you take it,” Bernard said, and tossed it to him.

“I can’t take this,” Kenneth said. He gazed at it deeply.

“Sure you can. You can pay for your education, or you know, actually study some retrograde temporal phenomena.”

“Thanks,” Kenneth said, and meant it. It moved the golden swirling sphere around in his hands.

“You’re not going to sell it, are you?” Bernard said. He stood up and stretched.

“I don’t know,” Kenneth said. He smiled at Bernard. “But I know how to find out.”

“I know exactly how I would study this thing. I know it responds to physical shock, so in the future, I would input some particular patterns, maybe in Morse code. Something I would easily recognize.”

“An digital codec used for early telecommunications over analog systems. It used a series of long and short pulses. Each combination stood for a letter. I actually memorized it when I was a kid for fun.”

Bernard chuckled. “Kenneth, you’re not really making a decision at all. You’re relying on future events to make present decisions for you.”

“Making current decisions better based on future certainties. That’s what retrograde temporal probability is all about!”

“What if you get the message and decide to sell it anyway?”

“You don’t understand, Bernie, I literally can’t. Something will stop me from selling it, no matter what I try.”

“What about Schrodinger’s cat? Quantum probability? Multiverse theory? Free will?”

“All bullshit when you have access to anti-time, my friend. I’ve already created an experiment with a dichotomous outcome. Either I keep the sphere, or I sell it. I have no choice!”

“Gimme the sphere back,” Bernard said.

“The experiment just disproved multiverse theory,” Kenneth said, and held out the sphere.

“It just disproved it again!” Kenneth clutched the ball and looked into it with a smile.

Bernard scratched his chin. “You know what, Ken? I’m going to go over to the music department. I’m taking up the guitar.”

“It’s what you were always meant to do!” Kenneth said, standing up excitedly.