Prophet of the God Seed, part 1

The desert. That is where prophets are made. 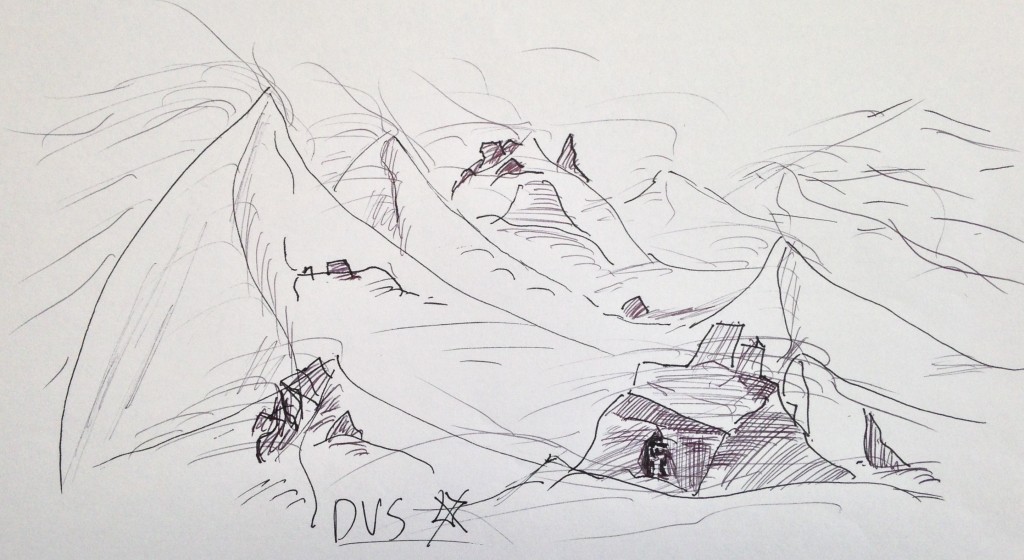 Across the vast wastes of time, when each year past is but a grain of sand and each world gained and lost a chapter of a book, the desert has always meant something to men of faith. Flat, desolate, waterless… only a man of God can survive, and only with the blessing of his god, or so it seems.

Karakum. The Place of Burning. Drogathalum. The Sea of Sand. It marched all the way from the mountains of drought, Staltutum, to the steaming sea, or Drog’ta. The sea was the only sure place to find water for a thousand leagues, and it was boiling in the endless sun, sending storms raging across the savanna to the west and toward the Shadowlands, the night side of Terranostra. Still, in a land with as few goals as features, it was perhaps the only workable quest, as unfeasible as it seemed. There would be people there, farming and living off the grace of the savanna, and men manning the massive power plants for the larger cities in the habitable zone. If only there were a way to get there without walking.

“Oh, Padalmo, what were you thinking?” the young man said to himself. “You’re no more a prophet than a karatoid. You are probably as likely to sprout wings and fly out of here than you are to encounter God.” He sat underneath an overhanging rock which made for him a small cave, watching the piles of sand shift outside in the endless desert. The wind was howling, but it was also burning hot.

He had been left without a communicator, a computer, or any means of telling the time. He wondered how long he would have to wait for the winds to subside, when he could begin walking again. The sun would move off to the right for a time, lessening its oppression enough for Padalmo to brave the sands. Of course, he could still sweat out all the water they had given him between this rock and the next shelter he came across. He looked at the shadows. They were still very short.

Padalmo wondered if the people on the dark side did the same thing to their high houses each generation, sending volunteers to go wander in the snow in search of God. Their god, whatever he was. Padalmo knew, however foolish he might be in his own search, that the Darksiders didn’t really believe in the true God. Any god they believed in would have to be a false god, so heedless were they of the words of the Seeders.

The Seeders warned us of the dangers of exceeding our technological limits. This one truth we have held. I may not be their prophet, but when they return, they will be pleased that we have halted the progress of the Darksiders.

Padalmo snickered to himself.  “Do I really believe that? The Seeders are never returning. God will not be with them.” He leaned up against one of the sides of the little half-cave. “If I’m going to die out here, I might as well not die sleepy.” He closed his eyes behind dark goggles.

He imagined he was talking to his father, Highlord of Tala’Drog’chu, arrayed in his overlapping cloth mantle and his many war medals. He wore the same sour face as always. Ever disappointed in his twelfth son, who had refused the call to arms for the latest war. At twenty-two he was a man without prestige and with no wives to call his own.

“You always look so disappointed in me, father.”

“That’s because you are a disappointment to me,” the image said. No, he wouldn’t just say that. For all his faults, my father is at least kind to his children. “I just want you achieve greatness, and carry on the family name.”

“War is death, father. How can you not see that?”

His father crossed his arms. “The holy wars are what separates the grain from the chaff. They are death only for the unworthy. That is why our line is strongest, even among the highlords. Only those who are worthy come back to claim our fortune. I wish you would make the attempt.”

“You never struck me as the faithful type, son. I figured that was why you avoided the army. You are afraid of death.” Padalmo imagined his father’s surprised face when he told him that he was attempting the trial of the prophet.

“Hmph. I know better. You have something in mind.”

“I did.” Padalmo hung his head. Travole, his childhood friend, a commoner with a single wife, was supposed to come out and retrieve him. He had no way of telling time in the endless sun, but he knew that his friend was long overdue. Padalmo retrieved the beacon from his pocket. It glowed softly.

“Not content to try yourself in fire, and earn your appropriate prestige,” the image of the Highlord went on, despite Padalmo wishing it to be silent, “You had to try to be the prophet. You always want to be greater than your brothers, but you never apply yourself like them! You want to be the prophet because of what it offers you!”

“You want to live like me, but you want don’t want the effort of office. You want more wives than me, and none widows! You want a citadel instead of a high house!”

That’s not him, that’s me. Padalmo sighed and shut his eyes. I’ll get some sleep, then I’ll see how the sun is.