Home autobiography My Pool is a Swamp!

My Pool is a Swamp!

Lessons in Social Endorsements and Services

So this week was interesting. I went out to my pool on Sunday, hoping to do a little swimming since it was 100 degrees (and I have a foot injury that makes running a bit difficult at the moment), and saw that my pool had turned green, and was just short of the opacity of pea soup. I went down to the water, frustration burning my throat like the first drag on a clove cigarette, and retrieved my chlorine floater. Not a tab or pellet was to be seen. I dusted off my test kit and, sure enough, there was no chlorine in the pool.

Lots of people have pool issues creep up on them. Equipment fails and must be fixed, or sometimes, things are just allowed to go a little too far. However, I had hired a pool service last year. My pool should never be green. That, and this was not the first time this had happened. In fact, our pool hadn’t been totally clean all summer. It would cloud up to a nice green, we would bitch a little at our pool serviceman, and slowly it would become… okay. He would always have something to blame – dust from construction, our pump was going out, or the skimmer wasn’t working. Oh, and the city mosquito abatement team sent us a nice letter telling us our pool was in disrepair. In fact, the service got so bad I had to conclude he was either totally incompetent or purposefully not doing the job he agreed to do.

After doing some research and becoming slightly informed, I decided to fire the pool guy and do things myself. Below are the results. The first picture is after I thoroughly shocked it, so it is actually better than it originally looked. The second is after I thoroughly cleaned the filter and recharged it, then let it run for almost 24 hours. In the second picture, you can see the bottom, along with the Polaris pool creep, which is actually resting under 5 feet of water (our pool has a slight depth illusion to it). 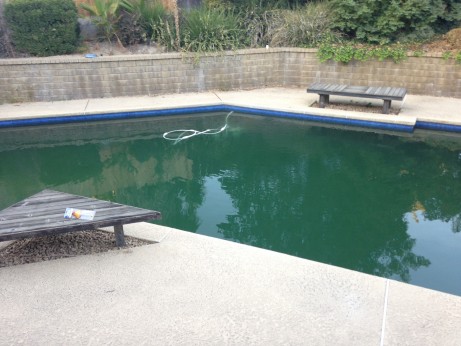 So Green! The creep is floating at the top. 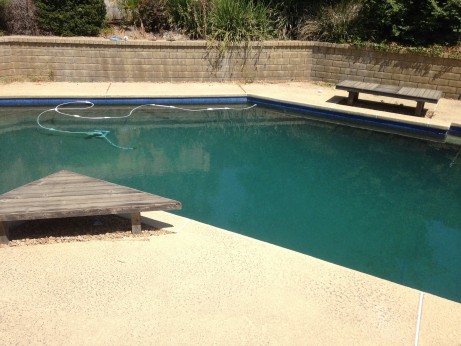 Nice and clean, and now the creep is at the bottom where he should be!

What transformed the pool? As I learned, simple maintenance which had not been done since I hired the service.

First of all, there is no excuse for letting my pool run out of chlorine. All you have to do is drop by and put in a few tabs, or drop a little liquid chlorine into the water. Time each week: 5 minutes.

Second, my filter, which uses diatomaceous earth, had no filter media in it, and had never been cleaned in the 10+ months I used the service. This made the filter run into the pool at a slight trickle when it should be a veritable torrent. I took it apart and hosed out the filter cartridge, then I put it back in, fired up the pump, and threw some DE into the skimmer. Total time: 45 minutes (and I had no experience doing this) twice per year.

All I did to clean up this pool was drop a bunch of chlorine in to kill the algae (along with some algaecide, which may not have been necessary), then I cleaned the filter and let it run for 24 hours. Magically, the water is beautiful and clear, almost as if the equipment were designed to keep it clean with minimal effort.

Other things I fixed:

The pool creep – I have an older Polaris 280, but it had been very poorly adjusted and had a broken backup valve. I replaced the valve and read the manual, then adjusted the creep accordingly. It now stays on the bottom of the pool and cleans the dirt, rather than floating around like it did for weeks prior to my wife and I firing the pool service.

The skimmer – I found the skimmer basket floating on top of the water, not below the skimming funnel. Who knows how long it was like that.

The pump basket – Had apparently never been emptied. It was full of pine needles.

Time running the filter – The filter was set to run for 4 hours, rather than the 8 necessary to cycle all the water through. The creep was also set to run for more than 2 hours when it only needs to run for 2 tops.

Why on earth did we hire this service?

So, the pool guy took us for a ride based on the fact that we didn’t really know how to manage pool equipment. We were also very busy during the year and the summer, as my wife had a baby at the end of July. We didn’t really have the time to double check work or do it ourselves, or so we thought.

There are definite lessons to learn from this experience. First of all, we hired the guy and we gave him a second chance when the pool went to hell at the beginning of July, so ultimately we are responsible for a large part of the blame. We didn’t properly vet him, and we should have. But why didn’t we? Because we relied on our social network to do that vetting for us.

The fellow we hired was a friend of a colleague of my wife’s. That colleague vouched for the him, and ultimately, we trusted that endorsement. Clearly, the trust was misplaced, but we could have (and should have) been more skeptical (and I consider myself quite the skeptic!). Ultimately, business and social consequences have been steadily divorcing themselves from each other as our communities break down and we tend toward greater local anonymity. Here are a few ways to do your own simple vetting and avoid having your pool turn into a swamp while your wife is recovering from childbirth:

We failed to do all of these things, and we paid for it. The man we hired was not personally bonded or insured, worked for us on the side (we found out recently he also worked for a larger pool company), and didn’t have a proper business front. My wife’s colleague was at a new job (so not so much a close friend), and was trying to do personal favors for the man we hired rather than using him herself. The rate was a little higher than other services, but we were supposed to get full service – including cleaning the filter – at no charge. We were told we wouldn’t have to worry at all, and we should have. We didn’t double check chemical levels or check his recommendations with the internet (he told us to cut back the time we ran the filter – turns out our original set up was correct and our pool ended up being cloudy partly as a result of that bad advice).

Very importantly, I didn’t consider the opportunity costs of doing my own pool maintenance. As it turns out, the knowledge is not difficult or time consuming to acquire for basic service and, when you are actually doing it regularly, takes very little time on a weekly basis. All that really needs to be done most weeks is to check some basic levels, sweep the sides, and keep the pool sanitized. Not much to ask for it to not be done.

An example of a job done right

This summer we also had renovations done (busy, right?). One of these was to have a wall put up where an open space had been. We asked our brother in law, who has a construction business, for a good contractor to do it, and he gave us one. This contractor was bonded and insured, had actual employees for the job, did what we asked, charged around the going market rate, and did the job on time. He was a semi-retired contractor and so wasn’t working on large-scale projects all the time, rather than a contractor  who was just starting out or who worked only on the side. He had something to lose, good standing with a construction company, and something to gain, money and further endorsements. Those motivations combine to create a functional business relationship where people get paid what they are worth and do the job that the customer wants.

There you go! Learn from my mistakes and my failures. Vet vendors that carry social recommendations, or else find eager businesses on the open market that want your money and are willing to give you what you want to earn it.