Pre-order it now on Amazon, coming in March! Here’s some of the things I go over in this book: How to self-assess your life priorities and decide where your focus should be How to design a creative process that will allow you to meet your goals, over and over again How to adjust your mindset so you can complete the projects you begin and become a prolific artist How to stay inspired and keep yourself from burning out. Pre-order it now!

The Writestream is at last coming to an end, with show #50. In this show, we will focus on how to end a story, resolve the conflict, and leave the reader/viewer satisfied. Please stop by and pay your respects (press F). If the channel still exists after December 10, I will be beginning another livestream format, hopefully bringing in more guests and creating something entertaining as well as informative. Also be sure to pick up my huge Christmas collection, which includes 10 books, before it goes out of print in January. https://www.amazon.com/dp/B0823RGLR6 And pre-order Eyes in the Walls, by new… 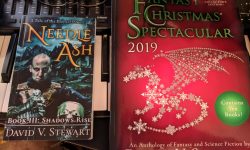 For a limited time only, you can get all of my published books in one mammoth volume – $9.99 for the ebook or (very appropriately) $20.19 for the gigantic paperback. I thought this would be a fun way to offer all of my stuff in one place, and also to publish a very large, very red book. The paperback is A4 size, set in two columns at size 10 font to pack everything in under 600 pages, making the volume quite affordable for the rather large amount of content within. Check this thing out!   This will be GONE come… 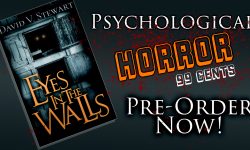 I’ve got a new book coming out, and you can pre-order it for 99 cents. After this period, the price will go up to 2.99. The ebook is free for Kindle Unlimited customers, and will be free for paperback customers when the physical becomes available. What should you expect? Eyes in the Walls is a book about a boy named Billy who sees a monster. No adults in his life believe him. They think he’s crazy, and they put him on antipsychotics. However, the other kids seem to believe him, even confirming the reality of the monster, who lives in the… 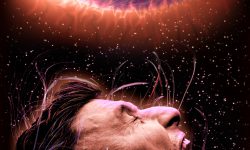 Yes! You can get my latest 2 hour read – this time scifi horror – for free for being on my email list. It’s something very different from what I’ve done before – a mixture of Lovecraftian themes, classic horror, dark scifi (with plenty of gore) – and in a fairly modern style. So join my list and check it out!

So, the silence on the site when it comes to new fiction content shall at last be broken. The secret book is finished, and in the video below I show off the cover, talk about the artist (Kerem Beyit) and give you some insight into this new book, which is solidly in the heroic fantasy/adventure fantasy genre. I’m really excited to bring this experience to you, and will be putting up a pre-order on Amazon very shortly.

In the meantime, be sure to subscribe to my email list (you can do so on the right side of the page or follow this link) to get early access to the book and also get some books for free to keep you busy until The Water of Awakening launches!

It seems that the  re-writing Moonsong has become a rather monolithic project. The complicated task of re-defining characters, plot points, and settings, all while carrying through changes to later (and better initially written) parts of the story has been one that is not only draining on my time, but also on my spirit. It’s hard to write when you aren’t excited to do so, even if the end product is quite polished, and I am ultimately far more excited to work on new projects in the queue than I am to spend my energies correcting mistakes that boil down to inexperience. Part of the difference is to blame for the last gap of updates, but adding to it is the considerable amount of effort required due to the nature of the Moonsong project itself. Pages upon pages of intricate notes and long story lines do not lend themselves well to a busy schedule that requires me to write in short bursts, and though I have had time to pour through such things lately, my schedule is likely to be impacted in the near future.

It is for these reasons that I am putting the current publication of Moonsong on hold for the time being, and instead choosing to focus on a brand new project. This new project is something I hinted at back at the first launch of the site called “The Bright Children.” I had initially put off the writing of it in service to other projects that I owed my attentions, and desiring to further hone my skills, but I think with the completion of Prophet of the God Seed, my mind is ready for some more extreme fantasy. My heart is also excited to work on something new and different, which will be critical in the months to come. I need to be very excited about a  project to pull out my laptop at lunch or between other obligations and throw in a few hundred words in a short amount of time. I need my mind to dwell on the elements of character, setting, and story. This is such a story, whereas a re-write of an older work is not.

So, in moving forward with 2015, I am introducing the latest novel-length  story to my canon:

Set in a world of total darkness illuminated only by a race of humanoid spellcasters, The Bright Children mixes elements of horror and fantasy in story that is both narrative and myth.

Publication will begin with the prologue (which already exists), and follow with the narrative proper on a weekday update schedule.

At long last, the writing and subsequent digital publishing of my “little” samurai novel is complete. The first words were typed while I was on a break from teaching a special education class in El Segundo, California, and the final words were written in an uncomfortable high chair in a Starbucks that was attached to Marriot in Sacremento, California. That is somewhat symbolic for me, as there were as many words written away from home as at home; my life has been in a state of upheaval for some time, but I still got the work done.  Muramasa was definitely the…

My samurai tale, Muramasa: Blood Drinker, will be finishing its online run in the next few weeks. For those of you who thought everything would wrap up neatly yesterday… You didn’t think I’d let everything go so easily, did you? I’ve learned a lot through the serial publication of this story over the last few months, and I’m ready to share some of that with you, and to talk about some upcoming experimentation. For those of you who are authors, I hope it will be an interesting discussion of a rather unorthodox business model that will inform your own decisions.…