Prophet of the God Seed, part 2 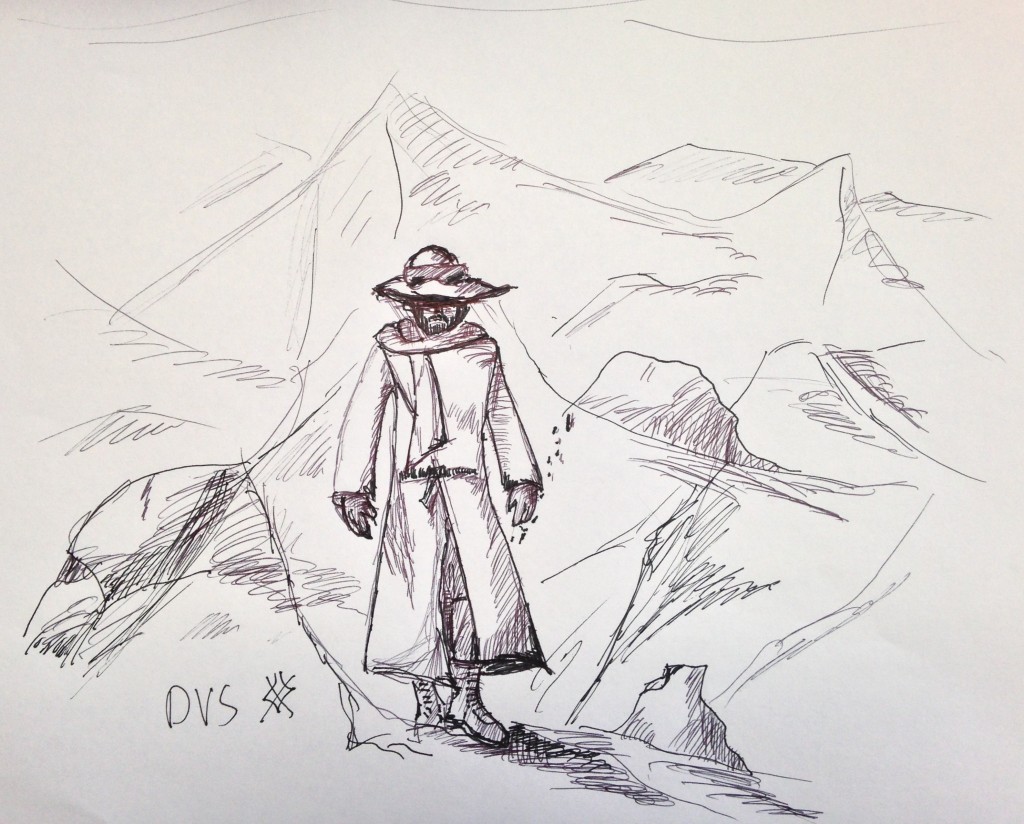 Padalmo woke to darkness. It was not the darkness of drapes drawn on the sunward side of a house during a sleep period, which was deep and overwhelming, but rather a soft, rippling diffusion of light. He could see the sand outside the rock overhang, sitting still in piles and dunes where it once was shifting. The shadow of the rock itself blended with the color of grey sand outside.

A storm, Padalmo thought. There’s not supposed to be storms over this part of the desert for another quarter year. He crept out and looked at the sky. Large billows of low clouds, ranging from slight grey to near black, raced overhead, stretching over the plains of rock and sand as far as Padalmo could see in either direction. The wind on the planet’s surface was still calm, a relief from the burning hot gales that ever shifted the sands of Karakum. Storm winds would come later. How long had he slept, to miss the calm front of a storm, so far from the sea of Drog’ta?

“By the grace of the Seeders, what a relief,” Padalmo said. He removed the scarf and goggles that had protected his face against the biting bits of silica that had been swirling painfully about him before. A short, black beard stood out below a pronounced nose. Blue eyes blazed, surrounded by skin darkened to a deep, chocolate brown. He breathed deeply, glad to feel fresh air once again. No air smelled as good as the front of a storm, especially in the habitable zone, with its constant reek of industry and human life. He could only wonder how pure the air felt in the safe areas around the burning sea.

This is God’s breath, he thought, and smiled. Perhaps he could find faith on this journey after all. He removed from a pocket his compass, an ancient tool but invaluable if you took the teachings of the Seeders to heart and chose not to rely too heavily on technology. He watched the red needle fly about and point off to his left. In the habitable zone, you would need the sun’s constant position to figure out where the weak north and strong south poles were of Terranostra, and therefore plot your direction. On the sun side such efforts became unnecessary, as the compass would always point true south.

Padalmo figured his positioning, then plotted a course that would take him relatively to the north-east, to the steaming sea. He took a look back at the small rock group that had been his home for… how long was it? He could not reckon. The formation felt significant to him, partly because of the revelations it had given him through the remembrance of his father, and partly because he knew he would never see it again.

“Farewell, shelter of peace. May you give to the next prophet what you have given to me.” He said a silent prayer to God and set off.

Part of him worried about the unexpected storm. Rarely did such storms drop much moisture sunward of the Staltutum mountains, but if this one did, which seemed likely given how dark the clouds were, it would turn Drogothalum into Drogothured, a sea of quick sand. Water is life. A flood is death. How delicate we truly are.

“God will provide me shelter, if it comes to that,” Padalmo said to himself. “I go with God’s will now.”

He walked quickly beneath the leaden sky, the sand moving harshly under his wide-soled boots. His lips parted his dark beard into a smile.

The rain came. It proved to be a blessing, not a curse. Rather than the torrential downpour Padalmo was expecting, having seen only the storms in the habitable zone and upon the Mountains of drought. The rain was sparse, unloading heavy drops of water for a few minutes at a time, then ceasing. The water cooled Padalmo’s face, and during a few showers he was able to catch some drops in his water collector, essentially a funnel that filled his expandable bladders. He might have enough moisture to complete the journey on his own terms, an encouraging thought after his friend’s failure to retrieve him. The rain also provided an unexpected benefit with the sand, which would soak up the water and then quickly dry, leaving a crust that made walking on the dunes between rock formations much easier.

How long would it take him to reach the Steaming Sea? He did not know, for he had no better an understanding of the passage of time under the storm than he did under the changeless, ever-shining sun. He felt confident he would get there, alive an in one piece. He had drank his fill while keeping his water bladders full, and had even stopped to urinate a few times on the walk.

“It’s funny how good it feels to make water when you simply haven’t been able to for a long time,” he said to nobody. “Even better than holding it, if you ask me.”

He could see the end of the storm now, as a bright shining stripe of white sand on the sunward horizon. It was growing, but Padalmo was sure he would come across shelter before it arrived to bake him once more.

No shelter appeared for Padalmo. The storm had flown away, nightward toward the Barrier Mountains and the jungles on their steppes, leaving the young man turned prophet in the blazing, undiming sun once again. It hovered off to his right, lower in the sky than where he had been, but not yet low enough to be less than deadly. Beneath his robes, scarf, goggles, and moisture suit, he sweated profusely. He longed to remove them all, but the sand, which swirled again with the loss of the storm, would have carved his flesh to a bloody pulp. His bladders were growing lighter as well, and he felt parched.

“This is just another test,” Padalmo said, heaving his boots through the loose sand. “Salvation comes always at the edge of death. God needs a prophet who trusts, and is unafraid of death.” He said it aloud, hoping he would believe it, but the old doubts were returning. Self-hatred and fear presented themselves again, marking his inner self as an unworthy messenger for the almighty.

The sand stretched on ahead of him, unchanging. No clouds sprang up to give him cover and blessed life. Drog’ta was invisible. Drogathalum was ever-present, destroying him.

I have no choice but to believe in the salvation ahead. For if not for that, I will die anyway. Either I am the prophet or not.