Prophet of the God Seed, part 3 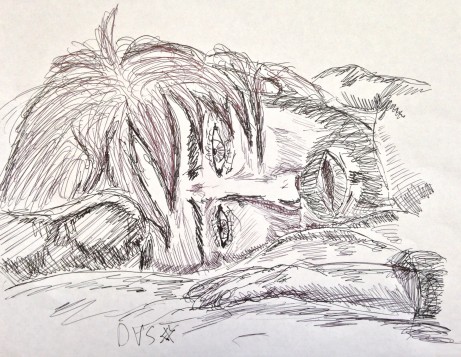 Padalmo was crawling now. His legs had grown too tired and weak to continue shoveling through the sand. He got better traction crawling, though the infinitely small particles of silica slipped through his fingers like they were water.

“I am a child again,” he said aloud. His voice croaked. “You must become like a child to enter the kingdom of God. So be it, either I enter now, crawling like a baby, or I become its prophet.”

His mind was flooded with vivid memories of his home, the high house of Tala’Drog’Chu, the mansion of Imalmo, his father. Joy for Padalmo existed in the casual existence of growing up in the harem, away from the busy streets of Pana’Chu, the bay city his family had ruled for innumerable generations. He played games with his brothers, all of whom had eventually left for the war against the infidels, one-by-one, leaving Padalmo behind. He teased his sisters, who one-by-one were married off to other high houses, strengthening the alliance of the Faithful, or given as reward to a loyal servant of the city-state.

It was a simple, but lush experience. He never went hungry. Never had to go without, or have unfulfilled desire. He had never wanted more, but everyone, Imalmo in particular, had demanded that he want more. Pursue more. That meant war and death, just to get back what he had lived with his whole life. It was bitter.

He missed them all now, even his father, seeing his death before him, but he missed most Fala. Fala, who had made him a man while he still lived as a boy in the harem. Fala, who had taught him the ways of women as much as the ways of his own body. Sweet Fala, with blooms in her tawny hair. He thought of her body, slick under his. He breasts, and her legs wrapped around his hips, and her arms around his neck. She had taken from him when he could not understand as a boy. As a man, he had grown to need what she took. He was suddenly wracked with guilt about his relationship with her. Fala, forbidden fruit.

He longed for her the most. He missed her council. She had helped him avoid the war. She had not wanted him to make the prophet’s journey, but had understood why he needed to. Did he love her, after all?

Padalmo was back in the bay, under the twisting foliage, blocking the sun, which was low in the sky. A cool breeze dried his sweaty face. Fala was there, wearing a long, silken gown whose revelation of the curves of her body would be acceptable only in the seclusion of a harem. Her green eyes stared at him. She was not smiling. Padalmo wanted her to smile. She poured a glass of some liquid, which was red. She handed it to him. He drank. It was sweet.

Fala was silent as she set her drink down and began untying his robes.

“I’m the prophet now. I could take you for myself, if I wanted.”

Fala looked up at him. Her green eyes blazed. She reached up to her shoulders and pulled the straps of her gown. The garment fell down, sticking on her hips and exposing her breasts. Padalmo felt his hands reaching for her hips, and pulling the gown the rest of the way off.

They were suddenly making love, fervently. She was silent, staring at him. His ears were filled with the sound of rushing water beside them. He realized the shore of the bay was rising. The table was tipped over, and his body was struck with cold, harsh water. They were carried up in the deluge. Padalmo reached out for Fala, but she had already been born away from him.

The dream vanished, and Padalmo opened his eyes. He was still in the desert. His face covering had fallen away, and he could feel sand sticking to his lips. His hat lay under his head, failing to shield him from the harsh sun. He tried to cry out, but could not. His throat and lungs were dry, dying.

Why couldn’t I die in the dream? he thought. His mind searched out again for the vision, and he realized that he was cold. The wind was blowing harshly, enough to pull away what moisture remained in his robes and moisture suit, cooling him quickly. Flying sand obscured his vision.

The wind intensified, gusts blowing sand into Padalmo’s mouth. He squeezed it shut and tried to move. He craned his neck to see that his body was partially buried in sand.

Nobody will ever find me. The wind became even stronger, and out of the blinding blizzard of silica flecks, Padalmo saw something he had never seen before.

A grey object appeared, hovering some fifty feet off the ground.

A transport? Perhaps Travole has come for me at last.

As it neared, Padalmo could make out what looked like exhaust ports, glowing a bright blue. The roar of its engines overpowered the wind. It neared and flew lower, passing over him  and moving out of his vision. He could feel vibrations through the sand.

After a few minutes he felt hands groping him. Sand was pouring off of his body, but even relieved of the weight, he found he could not move his appendages. He had truly become like a baby, unable to lift himself or even crawl. He was being carried by his shoulders and feet. He looked up at the sky, a pale and stark vanilla-blue.

A face filled his vision. A bald man, with a smooth brown face. He was smiling slightly. He was speaking, but the words were incomprehensible. It reminded him of the high-speech, which he had learned from birth in recitation of the holy texts. The old tongue, but everything was being pronounced incorrectly. He heard another voice speaking in the same manner.