Prophet of the God Seed, part 4 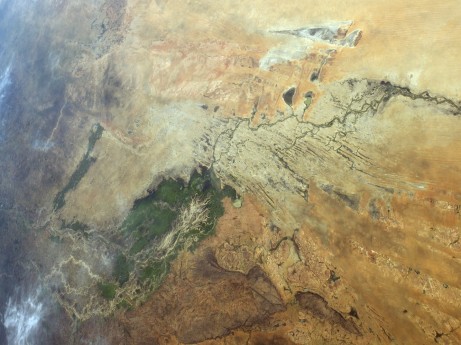 Padalmo dreamt nothing more. Fala did not come to comfort him. He awoke to the sounds of machinery, humming quietly and clicking away in uncertain rhythms, and was aware of a soft repeating tone. He forced his eyes open. The ceiling was a cool white interrupted by grey lines intersecting one another in squares. He tried moving his head and found he could move slightly to either side, though it hurt gravely to do so. He could see that he was on some sort of bed, only raised off the ground a few feet. There were similar, empty ones off to each side. Tubes and wires hung down in his view.

He had heard the unfaithful slept in such beds, high off the ground. Strange. Perhaps it was they who had saved him. Or was he captured? Strange mercies.

The seeders, he thought, as memories of his rescue returned to him. The strange bald man, speaking what he knew was the ancient tongue of the holy texts, only strange and foul. Perhaps the seeders had returned, as stated in the prophesies. I would be the prophet, then. The true prophet, not the figure-head they parade around Pana’Chu who just says the same old things. A pain assaulted Padalmo behind his eyes. No, that cannot be it. I never had the true faith.

He closed his eyes again quickly as he heard voices. It was a man and a woman. They were speaking the same strange words as the bald man had during the rescue, and Padalmo was assured of its origin. It was the holy language. It was the church that had spoken it wrong. Only a few words could he understand. The voices neared.

“Are you awake?” the male voice said. Padalmo was surprised to understand him, although he seemed to have an accent like a darksider, or one of the enemy factions in the south end of the inhabitable zone, though he had heard little of the speech of infidels.

Padalmo  opened his eyes and strained to speak. “Where-” His larynx stung as if it were pierced with needles.

“You’re onboard Greywing, one of the orbiting autonomous sections of Icharus,” the man said. It was the same man who had picked him up out of the sand. He was smiling. Padalmo noticed small metal ornaments on the man’s temples and behind one of his ears.

The woman said something he didn’t understand. Padalmo turned his head to see her. She was older, with long grey hair and a stern face. Her skin was incredibly pale, but her eyes were blue like the people of bay. The bald man spoke back to her with a pliant tone. She crossed her arms as if she were a superior to him. Strange. A woman telling a man what to do.

“Sorry about that, I’ve been informed that you don’t really know anything I’m talking about. My name is Moses,” the bald man said. “We’ve done our best to clean the silica dust out of your lungs and repair the tissue damage you suffered, but things may hurt for a while.”

“I am Padalmo.” Pain. Not as bad as the first attempt.

The woman said something to the man again. He nodded to her.

“Sorry. I am pleased to meet you, Padalmo.” The man touched one of the metal things on his head. “May God always show you the path to truth.” It was a common greeting at the temple.

Who is this man? Padalmo swallowed needles.

“You should get some sleep. We’ll try to do more tissue repairs later, and we can have a-” Moses looked at the woman. She was speaking harshly at him. “This is Captain Claribel. Sorry I didn’t introduce you.”

The old woman reached forward and grabbed Padalmo’s hand, then shook it up and down.

What is this about? The woman said something else to Moses. Moses looked back at him.

Padalmo nodded, then closed his eyes and relaxed his head. The sound of machinery filled his ears as footsteps retreated, echoing.

“I thought it would prove advantageous to retrieve someone who clearly would not be missed from the major populated areas, at least for a while. A man dead to this world,” Claribel said. She stood with her feet shoulder-width apart, her hands relaxed behind her back. Moses thought she looked very strong as she stared at the com screen displaying the clan chieftain. Malcom Macbeth looked as calm and in control as ever, but Moses was learning to recognize the hints of  emotion in people’s body language. The clan leader was frowning.

“We also saved a life,” Moses said, cutting in, hoping to deflect some of the chieftain’s anger. “The sun-locked side of the planet is most inhospitable.” He immediately regretted opening his mouth, unsure of why he rushed to defend the captain, especially out of turn.

“Keep it in mind,” the Clan leader said, smiling slightly. “We have rank order for good reasons. But you are right, you did save a life. Why do you think that is a defense?”

“Because you value life,” Moses said. “Or I wouldn’t be here.”

“Be that as it may, Moses,” Malcolm said, “but we cannot save every life along the way. There are billions and billions of humans, and we could not save them, even if it were our mission, which it is not.”

“Sir, is this conversation relevant?” Claribel said, glancing over to Moses. “We have a limited time table, or so I thought.”

“Learning is always relevant, captain,” Malcolm said. “Besides, your man is unconscious, and Tully and myself are finding the quantum gate to be a bite bigger task than we had originally anticipated.”

“Is that so?” Claribel said, raising an eyebrow. “Rare for Tully to admit she’s in over her head.”

“I’m not in over my head!” A high-pitched voiced piped from the background of the com screen. A young woman appeared in the background, seated in a metal chair. She had a mane of red hair and pale, freckled skin. “You want to try your hand at decrypting this ancient pile of junk?”

Malcom frowned and looked to the side. “I designed this pile of junk, you know. I’d say it’s held up quite well considering how long it’s been derelict. And you’re out of turn.” He looked back at the com screen. “Keep me posted on the planetsider.”

“Sir, there’s something else,” Claribel said. “It’s Moses. It seems some of his implants – the ones we were afraid to remove when we picked him up – have reactivated.”

“Interesting,” Malcolm said. He looked past Claribel to Moses.

“They are interfacing with networks planet-side,” she went on. “Using our signal amplifiers, he’s been able to access a host of servers on part of the planet’s internet. Purely a user-oriented experience, for right now.”

“So you think that they are in danger of collectivizing,” Malcolm said.

“It’s a possibility,” Claribel said. “Of course, only part of the planet seems to be using implant technology, but it would explain the deactivated quantum gate. Maybe this planet’s trade partners saw what was coming.”

“Not quite!” Tully piped in. Moses craned his head around Claribel to see her move off the com screen again. “The gate was closed on this side!”

“You’re out of turn again, Tully,” Malcom said, much more cross than when he had spoken to Moses.

“She reminds me of myself,” Claribel said, smiling. “Go easy on her.”

Malcolm nodded. “Aye. She does remind me of you.”

Is that a good or a bad thing? Moses thought to himself. He hadn’t gotten to talk to Tully much lately, but she was one of the first people to warm up to him. Maybe this is what it means to miss somebody. I’ll talk to Anders about it.

“How long has the gate been closed?” Claribel said.

“We’re working on figuring that out,” Malcolm said. “Re-activating it is a slow process, and we’re having to pipe in auxiliary power from the ship. My guess is, taking in the status of the planet below, it’s been a few centuries, if not millennia.”

“Only to some,” Malcom said. “Keep me posted, captain. I’ll let you know what Tully and I find out. Macbeth out.”